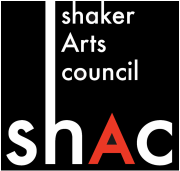 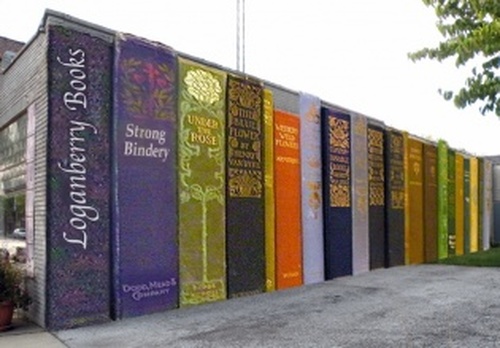 ​The colorful mural is located on the side of the building.This mural, celebrating literacy and community, has graced the side of Loganberry Books in the charming Larchmere area since November of 2011.  Artist Gene Epstein was commissioned to create the mural with suggestions for book titles from neighborhood residents, workers and schoolchildren.  The chosen titles represent children’s literature, local businesses and the city of Cleveland.  The work is created from photographs of actual individual book spines. The final image has been enlarged, printed on vinyl-coated banner cloth, affixed to plywood and mounted on the wall of the building.

Gene Epstein currently works as an artist, book artist, bookbinder, exhibit designer, muralist and jazz bassist. Ms. Epstein has an MFA in Painting and a BA in Studio Art. She is a former college art teacher, former museum Exhibits Department director, and former museum educator. Her folded book sculptures were featured in the 2011 book Book Art, Iconic Sculptures and Installations made from Books, published in Great Britain.

​Directions to the next stop

1. Follow Larchmere east to Coventry Road
2. “Urban Wildlife” is on the median at the intersections of Coventry and Larchmere

Jacqueline Kahane Freedman, 2020
A very colorful decorative interpenetration of floral, plants and other forms found in nature.  The animals featured are a raccoon, a squirrel and a rabbit.

Jacqueline Kahane Freedman is an award-winning artist living and working in Shaker Heights. Her commissioned art includes portraits and landscapes, and one of her specialties is the traditional Jewish Marriage Contract known as the Ketubah, as well as other Judaica. Over the years, her many-faceted career has included book jackets, advertising and editorial illustrations both in newspapers and magazines, as well as package and label designs.

Jackie is currently active as a member of the Northern Ohio Illustrators' Society, and in the past, she had been an active member of the Cleveland Chapter of the American Institute of Graphic Arts. She served on their Education Committee, was a judge for their Annual Student Portfolio Review, and also was the Board Member selected as their delegate to the AIGA National Conference in Breckenridge, Colorado. Jackie has also been a participant in four out of five of the last international Illustration Conferences (ICON).  Jackie holds a BFA from Pratt Institute, NY, and an MFA from Syracuse University. Website

​Directions to the next stop

1. Turn right (south) on Coventry to Shaker Boulevard
2. “Butterflies and Dragonflies II” is on the median in front of the small building.
Next